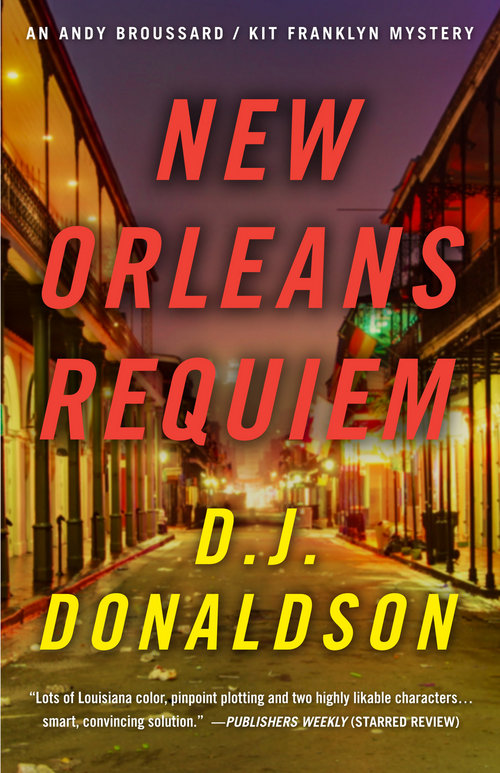 It’s a bizarre case for New Orleans medical examiner Andy Broussard and psychologist Kit Franklyn. A man is found in Jackson Square, stabbed, one eyelid removed and four Scrabble tiles with the letters KOJE on his chest.

Soon, there’s a second victim, also stabbed and missing one eyelid, but this time with only three letters on his chest, KOJ. Why only three letters? Does that mean there will be two more victims and then the killer will go away, or is he leading up to something much bigger? While Kit puzzles over the meaning of the letters left on the bodies, Broussard studies something very small he has found caught in the tape holding the letters together on each victim, believing they will tell him a great deal about the killer.

But it soon becomes clear that the objects he’s found are part of a game the killer is playing with Broussard, a game most likely engineered by one of the hundreds of attendees at the annual forensics meeting being held in the city. Has Broussard finally met his match or will he somehow prevail over what is obviously a brilliant adversary? The answer is revealed in the final heart-stopping pages.

In rereading this book as we got it ready for reissue, I was touched by Broussard’s willingness to share this story with us. The guilt he felt about the murders that occurred and the recounting of his deep feelings for a long-ago love were things he could have properly kept to himself. But he was man enough to let me write about them. And Kit allowed us into her innermost thoughts, too, even when they concerned her long-time boyfriend, alligator farmer, Teddy LaBiche. Neither Andy nor Kit held anything back. So in addition to a cracking good mystery with tension and danger and puzzles at every turn, you’ll get to see beneath the surface of two very complex and damned clever human beings that I’m proud to call my friends.
-D. J. Donaldson

What the critics say about New Orleans Requiem

“An…. accomplished forensic mystery. His New Orleans is worth the trip.” -NEW ORLEANS TIMES-PICAYUNE

“Andy and Kit are a match made in mystery heaven.” -THE CLARION LEDGER (JACKSON, MS)

“Donaldson has established himself as a master of the Gothic mystery.” -BOOKLIST