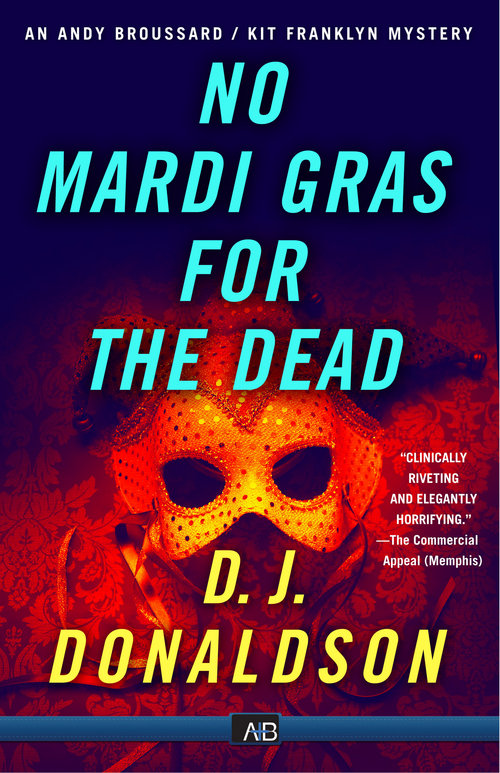 New Orleans criminal psychologist Kit Franklyn, lately drowning in personal doubts about her life and career, is suddenly faced with a disturbing event when a corpse is found buried in her backyard. Together with her boss, chief medical examiner Andy Broussard, Kit sets out to solve this case that seems plainly unsolvable. Though they identify the body as a missing hooker, now dead 27 years, all hope of finding the killer seems lost. That is…until they link the body and two recent murders to a group of local, wealthy physicians. With the exotic New Orleans backdrop and forensics aplenty, Don Donaldson absorbs readers into the lives of two protagonists with whom there’s never a dull moment as they attempt to crack this unsettling case.

I’m extremely grateful to Astor+Blue for reissuing my Andy Broussard/Kit Franklyn forensic mysteries. Because we didn’t know how they would be received by a new generation of readers, we decided to start with the last three of the original six titles and release them in the order they were first published. Thus, we started with book #4, NEW ORLEANS REQUIEM, followed by #5, LOUISIANA FEVER, and then #6, SLEEPING WITH THE CRAWFISH. At this point, we introduced BAD KARMA IN THE BIG EASY, a brand-new entry in the series.
The results are in. Readers have given the return of Andy and Kit such an enthusiastic reception Astor+Blue has decided to re-issue the remaining three titles. For character continuity, it seemed best to work our way backward to the first book rather than jump to that one next. So we now present book #3, NO MARDI GRAS FOR THE DEAD.
I should mention that the farther back we go in the series, the less connected electronically the world is in each book. And I can’t really change that because I’m simply telling you what occurred in each adventure exactly how it all happened. To alter anything for the sake of “modernizing” the story would be like saying Henry Stanley kept his notes on an iPad during his African search for Dr. Livingstone.
In this book Andy and Kit become involved in a murder that took place many years before they met. As all detectives (and probably most people in general) know, cold cases are the worst. Solving them is usually impossible. But for a very specific personal reason, Kit absolutely will not accept that result. Broussard, of course, won’t allow himself to be beaten by any circumstances.
-D.J.Donaldson

What the critics say about NO MARDI GRAS FOR THE DEAD

“Donaldson’s genre gumbo keeps you coming back for more.” -BOOKLIST

“No mystery has ever started in a more clinically riveting and elegantly horrifying style…. If you haven’t met Broussard and Franklyn, you should make your introductions.” -COMMERCIAL APPEAL (MEMPHIS)