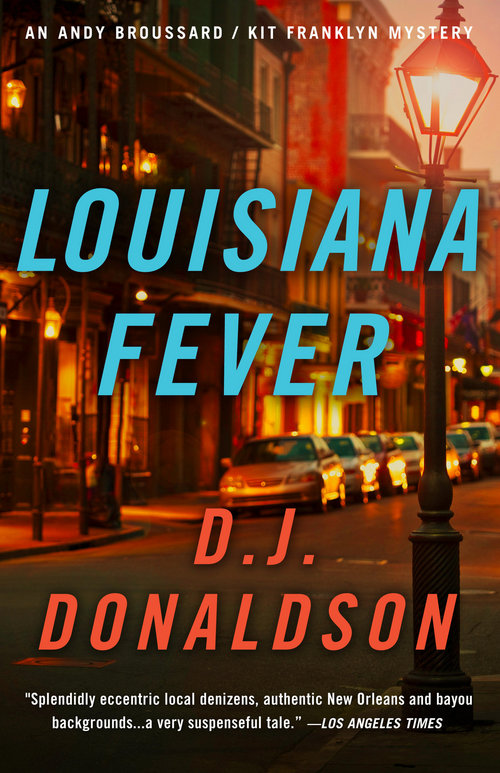 New Orleans medical examiner, Andy Broussard, and his sidekick, psychologist Kit Franklyn, are about to confront two of the most remorseless killers the city has ever seen.

The nightmare begins when Kit goes to meet an anonymous stranger who’s been sending her roses, only to have him drop dead at her feet before she discovers his identity. Broussard learns that the man carried a lethal virus similar to the deadly Ebola. Soon, another body shows up with the same bug. “If your skin doesn’t crawl with the step-by-step description of the work of the medical examiner and his assistants, it certainly will when Donaldson reveals the carrier of the fever. ” (Knoxville News-Sentinel). And that carrier is on a quest to find Broussard.

But Kit isn’t safe either. As she searches for more information about her mystery suitor-and the source of the virus-she encounters a human killer every bit as cold blooded as the creature searching for Broussard.

This book marks the second Andy Broussard-Kit Franklyn mystery reissued by Astor+Blue. The first was NEW ORLEANS REQUIEM. It’s always thrilling to see one of my books get a second life, because it moves Andy and Kit back into the light. And that feels like something I owe them.

In this one, they both suffer through some events I’m sure each of them would rather forget. In Kit’s case, her trials include discovering a secret about herself that will forever change her life. Broussard suffers, too, but in the process learns a huge lesson about someone he doesn’t like. On a personal note, sometimes people blame me for the bad things that happen to Andy and Kit. But these same people don’t blame ESPN when their favorite team loses a game, nor do they hold the weatherman (or woman) responsible when it rains… unless it was supposed to be dry. What I’m trying to say is, I’m just the messenger here. Sure, Andy and Kit get into a lot of jams… but it’s the nature of their work. So please… before you send someone over to my house to toilet paper my trees, think about what I’ve just said.
-D. J. Donaldson

What the critics say about Louisiana Fever

“This series has carved a solid place for itself. Broussard makes a terrific counterpoint to the Dave Robicheaux ragin’ Cajun school of mystery heroes.” -BOOKLIST

“A novel of… “terrifying force…. utterly fascinating… His best work yet.” -THE COMMERCIAL APPEAL (MEMPHIS)

“A fast moving, … suspenseful story. Andy and Kit are quite likeable leads …The other attraction is the solid medical background against which their story plays out.” -DEADLY PLEASURES

“If your skin doesn’t crawl with the step-by-step description of the work of the (medical) examiner and his assistants, it certainly will when Donaldson reveals the carrier of the fever.” -KNOXVILLE NEWS-SENTINEL

“Keep(s) the reader on the edge of his chair and likely to finish in one sitting.” -BENTON COURIER (ARKANSAS)

“Tight and well-paced… Andy (Broussard) is a hugely engaging character… (the) writing is frequently inspired.” -THE ARMCHAIR DETECTIVE