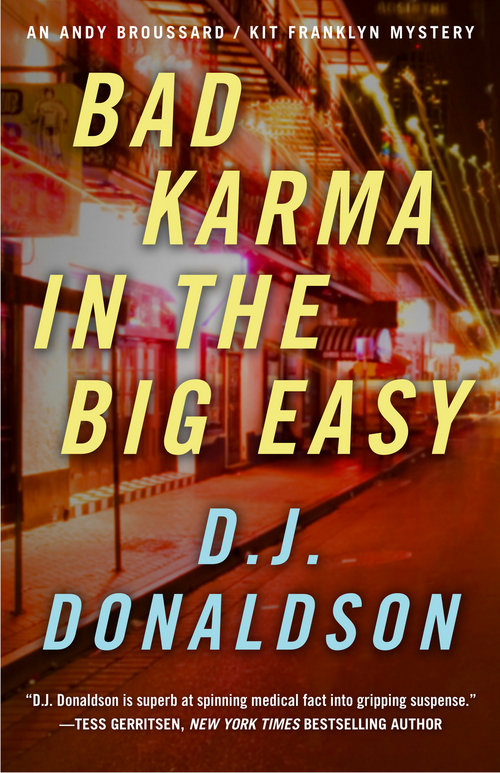 Andy Broussard, the hugely overweight New Orleans medical examiner, obviously loves food. Less apparent to the casual observer is his hatred of murderers. And right now, his skullduggery sonar is squealing. Among the dead collected in The Big Easy floodwaters after hurricane Katrina are three nude female bodies, all caught in the same brush tangle, none with water in their lungs. Nude… no inhaled water… This is not the work of Katrina. There’s a killer out there and by God, Broussard means to find him. But how? The city and all its records are destroyed, practically the entire population is scattered to other places, the police force has no offices and many of the rank and file who haven’t defected are homeless. If that’s not bad enough, Broussard makes a shocking discovery about the bodies that completely obliterates any way to determine time of death. Who could possibly solve this crime under these circumstances?

Okay…. this is the one I’ve been waiting for… After reissuing three previously published books in the Andy Broussard, Kit Franklyn series, Astor+Blue now debuts this original, never before seen, new novel.

This book came about out of curiosity. After writing six books in the series, I took some time off to write medical thrillers. (Sorry if I’m telling you something you already know.) During that hiatus I often wondered what Kit and Andy and the rest of the gang were doing. Had Broussard lost any weight? Though he’s not concerned about it, his enormous bulk certainly bothers me. Had Broussard added to his collection of ‘57 Ford T-Birds or were the six he already owned sufficient? Was Kit still seeing the alligator farmer, Teddy LaBiche? I always believed their relationship was going somewhere, but I’m no authority on that kind of thing, so I didn’t know. I was particularly worried about all of them during Hurricane Katrina. So after things there had settled down a bit, I checked in with them to see how they’d coped with that awful mess. This book is what I learned and frankly, I’ve never heard a wilder tale. For you long-time readers, I know… I should have shared my findings with you long before this, but as Grandma Oustellette once told Broussard, “Life don’t always care about when you wanta do things.” Anyway…. here’s the whole cast, together again.
-D. J. Donaldson